“Google”: Is it all by a spelling mistake? 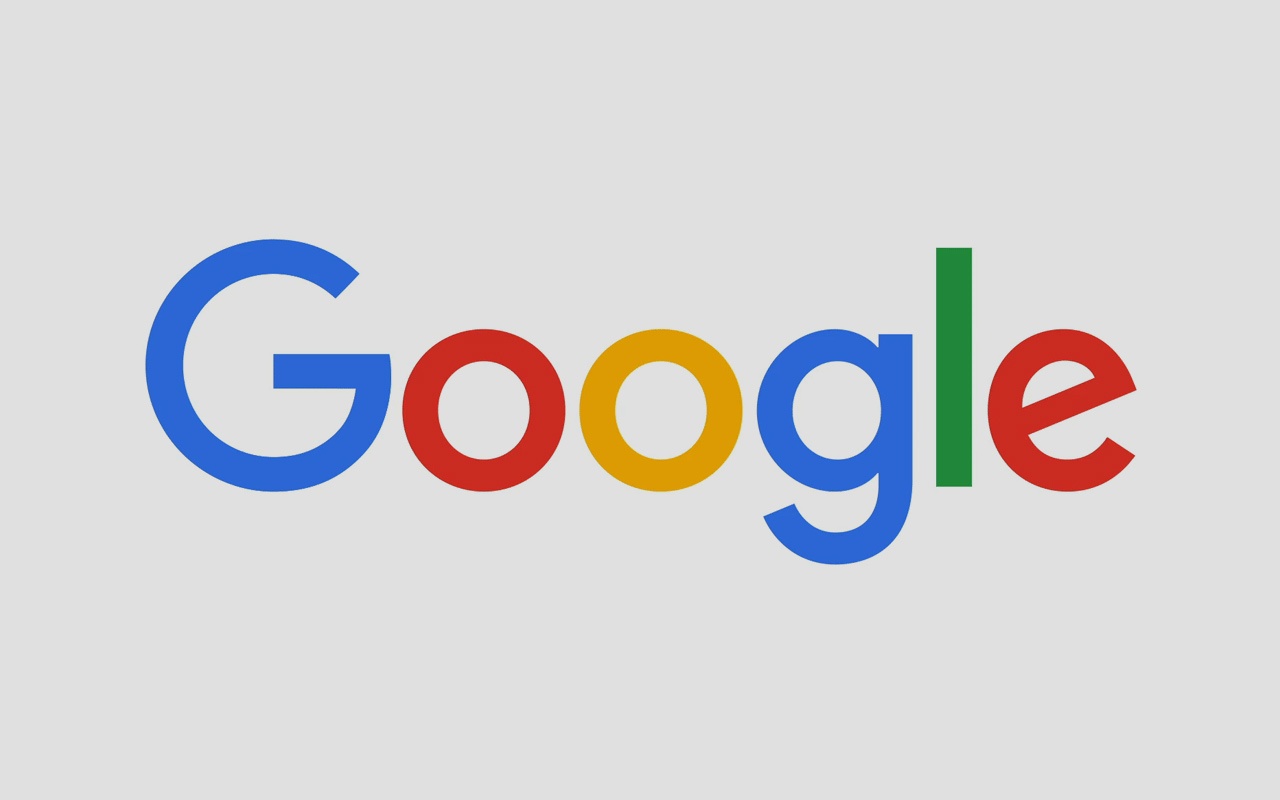 The greatest asset of Google is its mutating logo!

What? Why? How? Where? When? Don’t know the answer for a question on your mind? Google it! Google has become the air we breathe in search of information. It is the cradle of knowledge for many, source of income for few and cause of existence for more. What prowess thing can be handled by one million servers at their data centers across the world with one billion search requests a day? Google can!

Google’s initial name was “BackRub”. This name was in reference to the way it was designed to check backlinks in order to rank a website for search results.

As part of the  PhD project at Stanford University, Larry Page and Sergey Brin fastened their belts to solve the local search engine problem in Stanford campus. They aimed at creating a fast, qualitative and efficient internet search engine. They named it “Back Rub” in 1996 with the logo of scanned picture of Larry’s hand with title “BackRub” on it. It had worked efficiently servicing the Stanford campus for more than a year. But soon the bandwidth increased, demand of web search sky-rocketed, it was way beyond all statistics!

Back Rub has created an evolution. It didn’t last as a local search engine solution in the Stanford vicinity any more but took a prodigious transformation into a big firm by 1997.  Though it was a simple design of a search engine, it is known famously for its job. They moved the search engine from the campus to the world outside.

14th September 1997: the day has come when both the founders started brainstorming for an innovative name to change the name of their dream firm. Many Stanford students were there in the room to suggest a new name for the search engine. One of the students Sean ­Anderson said “Googolplex”; a Mathematical term for the number 1 followed by 100 zeros.  Larry jumped and shortened it “Googol”. He mentioned it to Sergey Brin that this name will represent the infinite amount of information on the web world, which they were aiming to streamline.  Sean Anderson, who was on the computer rushed to check if the name is available as a domain name to register, typed ­”google”  and made the most famous spelling mistake in the business history of the world. Actually  “google” is a misspelling of a real-life Mathematical term “googol”. And,  both the founders were happy to find that “www.google.com” as a domain name was available for them to register. They had registered the domain “google.com” on the same day.

Are you wondering if  “Google”, the name is all a mistake or a play of spelling?  Will that really matter anymore?

(A screen-image of the then Google) 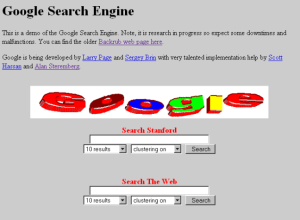 Doodles are simple and casual drawings which got a representational meaning. We all have drawn some or other doodles of our class-mate or class-teacher in the margins or back-page of our notebooks during our school.  Google took this simple creativity of doodling into a new world-canvas through their everyday presentations placed along with the logo on their home page.

In 1998, August Google had introduced a creative feather to it’s logo by adding doodles to it’s home page. Prior heading to the Burning Man Festival in the Nevada desert in that weekend, Larry and Sergey incorporated an iconic man into the Google logo so that the viewers of the website are informed about where the Google guys would be.

This was the start of a doodle festival on Google’s home page. We have witnessed thousands of  doodles on everyday basis on the google site recalling the historical and cultural importance of that particular date.  An early year example is shown here: 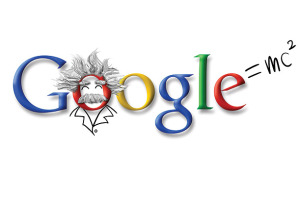 Most of the doodles of Google were often simple, just like the funny cartoon drawing of Albert Einstein on his birthday, also displaying the law of Physics invented by Einstein; E=mc2

This transformation of the Google’s homepage with a new doodle, marking the remarkable discoveries, inventions, famous birthdays and notable news is awaited by millions every morning. Wow, these paintings on the canvas made of digitals are viewed by the millions and gets washed away in just 24 hours.  The various works of art are beautiful illustrations adored by many Google lovers. Google continues to surprise every day with a new doodle depicting important events, festivals and what not! By the way, did you see the Google doodle today?

The founders decided to use only the primary colors for the logo. Since then changes were made to the official Google logo because, for a brand like Google which is witnessed million times in a day change is inevitable and essential.

When the firms beginning started taking place on the servers at Stanford University, during 1997, this was the design, though the creator of the art work is sparsely known.

A little juggling of colors are added to the previous logo.

This simple winner logo, used across 11 years since 1999, offered a professional look with better readability using ‘serifed’ font. The shading and texture of every letter occupied lightness and weight on the page. Though the colors are solid, it reflected a ethereal quality.

Effected with a shadow reduction and revamp of brighter colors, this logo stood bright on it’s site through 3 years.

Again a modification to Google logo; all letters are flat and their angles are softened. This helped the readability of the logo even on smaller sizes. Of course, a single tweak of a pixel will move the world and will be noticed isn’t it?

1st September 2015 witnessed a big change on your comp. The look and feel of the Google logo is changed with tailor-made sans-serif family typeface called ‘Product Sans’. The very funda of the new Google logo to be most user friendly to function on any kind of devices such as PCs, smart phones, tablets, TVs, smartwatches and across all platforms and apps.. Google’s new look fits on “even on the tiniest screens” says Tamar Yehoshua, the company’s Head for User Experience.

To be straight, the new motif is clean and geometric with uniformity and is in primary colours. Matching the Google logo, the little blue “g” icon has also been replaced with a four-color “G” . As per the company spoke, the new logo is presenting it’s business philosophy of being simple, friendly and approachable. 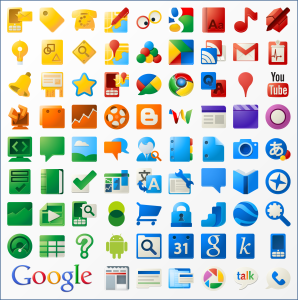 The list of products owned by Google Inc is incredible and versatile. From Search tools, communication and publishing tools, advertising, software development, security, geographical map, statistical tools, desktop applications, mobile applications, operating systems and hardware products. There are lot of mergers and acquisitions too are done by Google. Here goes few famous of the wide range of Google products; Google Web Search, Gmail, YouTube, Android, Blogger, Calender, Google Earth, Google+, Google Docs,  Google Analytics, Adsense, Translate, Picasa Web Album, Webmaster Tools, AdWords, Google Chrome, Google Hangout…etc. And the list goes on! Google even helps developers with many tools. Most of them have their own APIs (Application Programming Interface) to offer easy integration with any third party services. To make your day easy, here is the list of all APIs  and products.

Google story continues with a biggest bang on the world wide web!