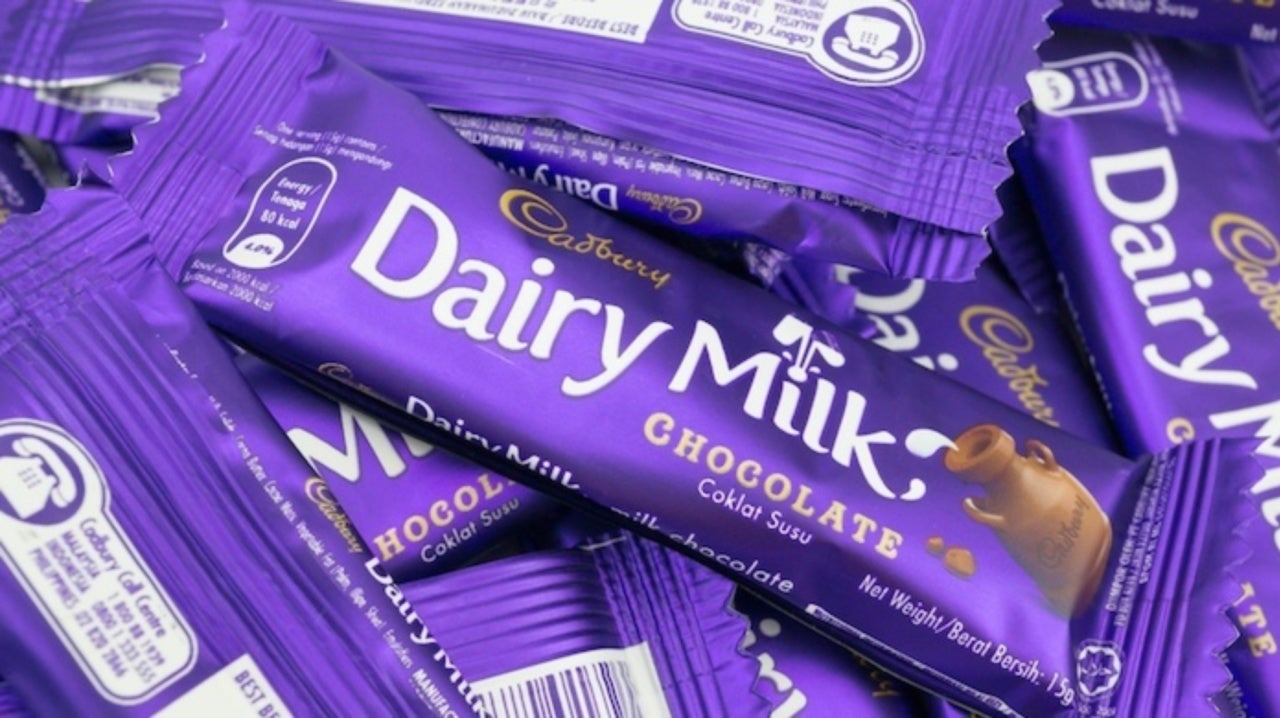 Drops of chocolaty bliss flow down the lips and fingers of the child, she was enjoying every drop. This is a common scene each of us has partnered at many a celebration times. These are the moments Cadbury had repeatedly gifted as sweet experiences to the loving families around. Every occasion in our life asks for a bite of a Cadbury chocolate and all it gives back is joy!

There is so much to decipher from Cadbury’s history. What has made the firm such an empire? Let’s  have a joy ride in the chocolaty wonder world.

The chocolate company ‘Cadbury UK Limited’  is headquartered at Uxbridge, United Kingdom. This ‘British multinational’ confectionery is owned by the American conglomerate ‘Mondelēz International’. Did you know your favorite chocolate brand has been making happy smiles all over the world since 1824? For above  160 years, the brand has been treating our sweet taste buds. 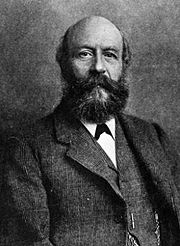 John Cadbury was one of the ten children of Richard Tapper Cadbury, belongs to a wealthy family from England. In 1824, at the age of 22, John started his first shop, to sell tea, coffee and chocolate in Birmingham of England before setting up his prodigious chocolate empire. He just did sold tea and coffee in the initial years and introduced a new drink in 1831 that caused euphoria among people of all ages. It was a drink made of cocoa and chocolate and was made by using a mortar and pestle. Later, during 1831, John opened a factory in the Crooker Lane in order to start mass production. In 1847, he was joined by his brother Benjamin to set up an exclusive store called ‘Cadbury Brothers’.

Cadbury: From a philanthropist’s perspective!

Cadbury’s family was a member of the Quaker group, who were a nonconformist religious group. They believed in ending poverty and deprivation as well as to take part in major social reforms. In these lines, John Cadbury believed his chocolate, cocoa, tea and coffee were alternatives to alcohol. And, he believed that he can help the society in removing the alcohol-related problems in the poverty-stricken and working class people by giving them chocolate drinks as an alternate to alcohol . With the government taxes reduced on importing cocoa beans in mid-1850’s, chocolate became affordable and a wider population could afford it. This helped the Cadbury business to grow manifold.

Cadbury for a chocolate revolution 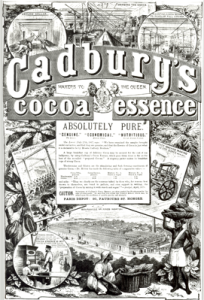 Although, chocolate was introduced in England over 200 years ago, even during 18th century, it remained as a luxury item as only the rich could afford. Thus, the visitors to his shop remained the affluent and the most prosperous families of Birmingham. By 1842, Cadbury had created 16 kinds of drinking chocolate and cocoa in cakes as well as in powdered forms. As time flies, by 1847, the business too grow big and the brothers moved to Bridge Road and established a bigger factory. In 1854 Cadbury received the Royal Warrant from Queen Victoria of London to supply chocolate and cocoa to the royals.

John Cadbury’s health declined and he retired in 1861, handing over the business to his sons Richard Cadbury and George Cadbury. The brothers were just 25 and 21 years when they took charge of the business. Richard and George faced difficult times in running the business and only because of their dedication and hard work, they could continue to run the family business and bring it out successfully out of the dark times. The number of employees in the firm declined from 20 to 11. The company started making loses till the next generation brothers have decided to sell only chocolate and discard tea and coffee business. In 1864, the firm was profitable again. 1866 is a breakthrough year when the brothers introduced improved cocoa.

1879 witnessed a milestone in the history, as a new factory was constructed in Bournville, and was conceptualized as ‘the factory in a garden’. The lay-out was created in such a manner that the factory was situated in the 14.5 acre plot, making it as a factory in an exquisite garden.  In 1893 George Cadbury acquired 120 acres of land closed to the factory and created a model village with sports and health amenities for the Cadbury community.

With a distinctive flair for advertising and promotion, Cadbury created a demand for their extravagant chocolates. The theme of the advertisements released by Cadbury were well received as they were authentic and creative. Soon, Cadbury’s Cocoa became the most sought after drink among all. 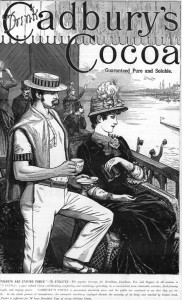 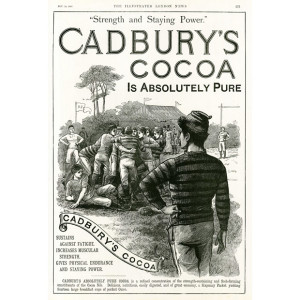 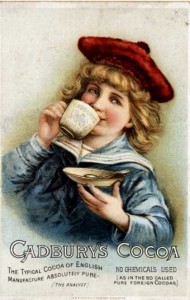 ^Some of the early day Advertisements of Cadbury Cocoa Drink 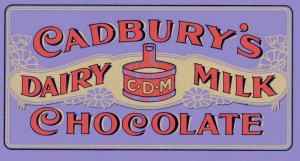 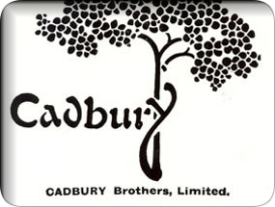 It was in the same year 1911, when William Cadbury, son of Richard Cadbury decided to give a new face to the new recipe perfected by George Cadbury. He met the French graphic designer and type designer Georges Auriol in Paris and chose his design as the new logo for Cadbury. The logo represents the stylish cocoa tree and the Cadbury name interwoven. The cocoa tree logo was registered as a trademark in 1911. Catalogues, presentation boxes, promotional items, tableware, prints on aluminium foils to cover chocolate bars and as such every possible advertising space was occupied by the logo. Though we don’t see this logo any more, it was consistently used from 1911 to 1920s. 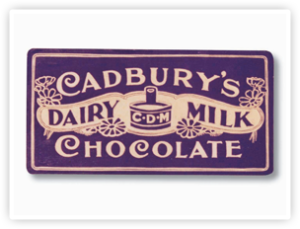 It was in 1920, that the presentation of Cadbury Dairy Milk turned purple and gold. When the chocolate was launched in 1905, it was packaged in a wrapper in pale mauve with red script and was wrapped in a continental style of ‘parcel wrap’. In 1920, it went through a makeover and the purple color which was adopted as the brand identity remains as a standard even today. The purple color was warranted as an honor to Queen Victoria of the United Kingdom by Cadbury. 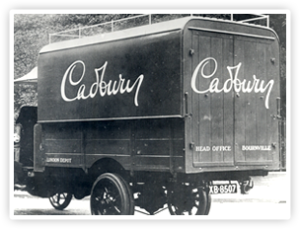 The year 1921 was when the Cadbury script-styled-logo came into existence. It was based on the signature of William Cadbury, the grandson of John Cadbury. Initially, the logo was cogitated as quite fussy. With the passing years, the script was simplified and it was only after 1952, it became widely used on all major products.The signature icon of Cadbury is the base-substance of all Cadbury motifs introduced in future till date.

‘A Glass and a Half’ symbol with two tilted glasses pouring milk was launched in 1928. This is the product slogan that evolved along with brand and stood strong for the decades of making the Cadbury brand. The ‘a glass and a half’ was referred to the the amount of milk used to make each half-pound of the chocolate. It was originally used for just press and posters. And today, as you can see it has become a well-spread promotional theme of the Cadbury. Cadbury diary milk entered the Indian market in 1948.

In 1969 Cadbury Limited got merged with the carbonated drinks company Schweppes Limited from Britain and formed Cadbury Schweppes Plc. But, in 2008 Cadbury Schweppes demerged and became two different companies to conduct the chocolate and beverage businesses separately.

Hereon, we shall draw the information on the modernization took place in the history of Cadbury logo along with it’s lead-brand ‘Dairy Milk’.

Toward the turn of 21st century,  during the year 1999, Cadbury’s flagship brand ‘Dairy Milk’ got a makeover in its presentation. It came with the standard purple color, but which was much brighter than before. It had a background with a 3D effect and the font of Dairy Milk was slightly curved. The ‘glass and a half’ logo also went through a remodeling, with the milk pouring into a piece of Dairy Milk, rather than the white background. 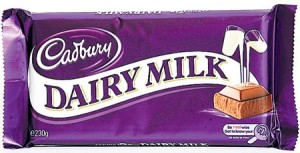 During 2003, Cadbury brand’s presentation underwent another refreshing change with the Cadbury logo being placed within a newly introduced swirling purple oval. The typeface was in white, slightly squashed and beveled of the previous one. 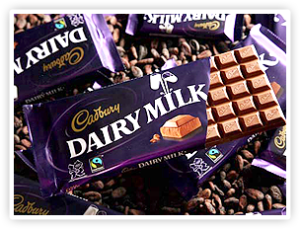 The new design had the Cadbury icon written in gold. The brand presented in gold makes it highlighted on the purple background of the label, making it as the best presentation of the brand so far. The ‘glass and a half’ image was re-designed with the milk now pouring into the Dairy Milk brand-name itself. 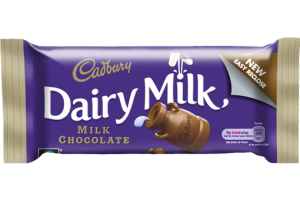 The new version of the brand presentation has a flat, clean, purple background. The Cadbury ‘swirl’ has disappeared completely from the design.

The distinctive purple color and the ‘glass and a half’ design concept are etched in the minds of millions around the world.

Every consumer, even a child who cannot read, do recognize a Cadbury Dairy Milk chocolate from it’s purple wrapper. That’s the reason Cadbury has been claiming it’s trademark rights on the color purple they use on their Dairy Milk packaging.

The Cadbury legacy with 150 years of British origin was taken over by Kraft Foods Inc. of United States in February 2010, which was in turn divided into 2 companies in 2011. Out of these 2 companies, Mondelez International Inc., an American multinational conglomerate, owns and operates Cadbury today.

With a sweetening, chocolaty history of 160+ years, Cadbury stays at the taste-buds of millions through continents. As they believe “a chocolate pack in any color other than purple wouldn’t taste as sweet” makes the strong positioning of the brand ‘Cadbury’.