Wikipedia: the world of words over the world wide web

Do you think the history has any indication towards our future? However, history ought to have a detailed knowledge on our roots. Curiousness like when, why, what, who and which have been the most frequent sparks in the human mind. Then comes the search for answers. If you ever had any such questions seeking answers, you ought to read the story of ‘Wikipedia’ and about its erudite symbol of globe. 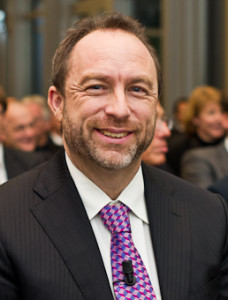 All of it started with a man whom many on search of knowledge are indebted to – Jimmy Wales! Jimmy Donal Wales, also nick-named as ‘Jimbo’ is the founder of the non-profit online encyclopedia named as ‘Wikipedia’.

Jimmy Wales was born on 8th August, 1966 in Alabama, a southeastern state in U.S.. His father was a shop manager and mother was an educator running a private school called ‘House of Learning Elementary School’. Probably his mother had influenced him in depth as a child, that he was hungry for versatile knowledge and spent whole lot of time reading the Britannica Encyclopedia. As a bright brain, he had later enrolled for PhD in Finance from Indiana University in Bloomington. But did not perceived in taking a doctorate, rather got engaged in creating his own doctrine in the word stage of internet. 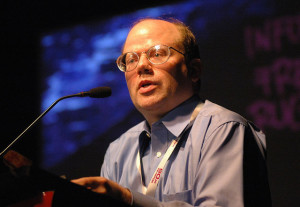 Jimmy Wales met Lawrence Mark Sanger, also called as ‘Larry Sanger’, on an online discussion forum. Both were interested in philosophy and they met online and then offline and became friends in due course. Years later when Jimmy Wales started Nupedia in March 2000, he hired Larry Sanger as the editor-in-chief for the project. Nupedia was a two man army though there was peer-review process carried out through associated members. (The peer-review  process is the activity through which an intellectual,  scholarly or research work, or ideas put to an audit and analysis by others who are experts in the same field, before publishing it.)

Jimmy Wales’s internet entrepreneurial life started when he was pursuing his graduation. In 1996, with his friends, he tried his first technological experiment on internet by launching a web portal featuring adult content, called ‘Bomis.com’. But he was not contented with that project and dreamt of a much bigger, more brighter, knowledge portal which came into reality in future in the name and style of ‘wikipedia’.  Jimmy Wales needed huge funds to start-up his passion; a free encyclopedia for all. His first venture ‘bomis.com’ had helped to get seed money for his next net start-up ‘Nupedia.com’ which functioned only for a short-while from March 2000 to September 2003. Nupedia followed an academic journal format, making it a reliable source of information by having its articles written by scholars and domain experts. Such articles underwent a peer-review process and were finally edited by Larry Sanger. Due to such slow process, Nupedia could publish only 21 articles in its first year. This is not what Jimmy Wales imagined about the internet based encyclopedia. Jimmy Wales and Larry Sanger were not satisfied with the response received for their free online encyclopedia. In a casual chat with his friend, Jimmy Wales discussed his concern about the slow traffic received by his website.

This software programming expert, who used to worked on ‘wiki’ software, suggested him to change the Nupedia website into the wiki model website. (A ‘wiki’ model website is a site that allows its users to add, edit, modify, or delete the contents on the website by using a normal web browser, while maintaining the history of the changes made.) Along with Larry Sanger, Jimmy Wales founded a new free-encyclopedia on net developed in wiki model and named it as ‘Wikipedia’ with the domain name ‘www.wikipedia.com’, and was launched on 15th January 2001. The name ‘Wikipedia’ was derived out of ‘Wiki’, the website model it used, combining with its very own activity of being an ‘Encyclopedia’. The firm experienced rapid popularity and appreciation from the internet community. As the website exploded with a big-bang and grown rapidly, Jimmy Wale became the spokesperson to promote this non-profit project. Wikipedia, in Jimmy Wale’s own words, give the whole meaning to its unique presence on net; “Imagine a world in which every single person on the planet is given free access to the sum of all human knowledge. That’s what we’re doing.”

Jimmy Wales wanted a huge number of volunteers around the world to collaborate and contribute into the rich content creation on his knowledge-portal. So, it was created as a charitable foundation with no-profit objective. With the objective to create, maintain and provide knowledge-based content and wiki-based projects for all people at no cost, ‘Wikimedia Foundation’ was founded on 20th June 2003. The trademark ‘Wikipedia’ was applied for registration at United States Patent and Trademark Office on 17th September 2004 and got the status of registration on 10th January 2006. And, this world’s well-known mark acquired registration in Japan during December 2004 and in the European Union during January 2005.

Today, as in 2015,  Wikipedia is world’s largest and most referred encyclopedia, having 35 million articles in 290 languages with about 500 million people visiting in a month, and is ranked at 7th position in popularity on internet. This is the world’s largest project ever created by people across the globe who have contributed voluntarily into the creation of Wikipedia without receiving any financial gains.

Besides being the exclusive online knowledge source through ‘www.wikipedia.org’, with its core goal to contribute knowledge to the human society, Wikimedia Foundation operates many wiki-projects under specific stream of specialties. It operated versatile wikis that are a knowledge-base of the world. Such wikis are listed below along with the description of specialization.

During the year 2000, to create a unique, meaningful and far-reaching logo, Wikipedia (then Nupedia) has arranged a competition. The first logo which got selected was submitted by Bjorn Smestad in the competition. Bjorn Smestad, an expert in Mathematics, was a teacher in Norway then. He tried to highlight two dark vertical lines on the image to represent letter ‘N’ of ‘Nupedia’. This design was created with the text by placing a quote from the preface of the book ‘Euclid and his Modern Rivals’ authored by Lewis Carroll. Having the fish-eyed effect in the design, only part of the text can be read. Though it lived for only eight months till the end of 2001, it is still remembered as one of the creative logos of Wikipedia.

While Wikipedia become a big hit, people who visited the website not just appreciated the content but started relating to it. As the outcome of the people’s like, they started suggesting new logos for the portal. During the last quarter of 2001, the firm shortlisted 24 best designers to participate in its new logo contest. The design content was conducted during November and December 2001, the winning logo was the one created by the user named as ‘The Cunctator’.

The logo used the text taken from the book ‘Leviathan Part I’ written by Thomas Hobbes. The logo doesn’t display the complete text due to its design effect. Want to read what it is? Here you go..

Desire to know why, and how, curiosity; such as is in no living creature but man: so that man is distinguished, not only by his reason, but also by this singular passion from other animals; in whom the appetite of food, and other pleasures of sense, by predominance, take away the care of knowing causes; which is a lust of the mind, that by a perseverance of delight in the continual and indefatigable generation of knowledge, exceeded the short vehemence of any carnal pleasure.

During the year 2003, Erik Moller, the Deputy Director of the Wikimedia Foundation, suggested an international logo contest to enhance the logo of Wikipedia with representation of all the languages in the world. His point of view was that the prevalent logo is made of the text in English alone and do not represent the multilingual community it connects with all over the world. A test was put online on its website to modify the logo. After a tough two stage voting process, a motif created by Paul Stansifer got selected. This logo became the new face of Wikipedia from 26th September 2003. This motif was a device of globe made of puzzle-pieces in multiple colours with text of multiple languages of the world on it. It symbolizes the whole world as it’s community, and also indicates the continuous development and construction of the portal itself.

Changing into a silver ball: A confirmation voting process was held online to corroborate the community consensus on the multi colour globe logo created by Paul Stansifer . An awesome twelve direct adaptations of the design was created by the members of the Wikipedia community was picked up by the Foundation. One of the modifications by David Friedlands got the final node which became popular as ‘silver ball’ logo of the portal. This revision changed Stansifer’s logo by changing it’s colors. The overcrowded  text was removed and replaced by one alphabet of each language it represented on each piece of the puzzles. This new avatar of the logo was introduced on 13th October 2003.

During 2010, the silver logo was lighted-up a little and a little glow was added to it.  The multilingual alphabets are clearer on the globe now and the 3 dimensional effects of the motif has achieve a clear mark with the artistic effects. People mostly recognize it by the name ‘Version 2’ of the puzzle globe. The font of the text used for the brand-name is open-source ‘Linux Libertine‘. The italics of the subtitle are removed as well. Media described the new version of the globe as “as being a metaphor for the project, Wikipedia”.

Do you think the top part of the globe is missing with some jigsaw pieces? No, it has a great meaning. It represents the incomplete nature, where new articles and languages are ought to be added.

Wikipedia is an ongoing history. A concept of humanity, humility, imagination, intellect, knowledge and kindness towards the fellow-human-being made the impossibles possible here.

This world’s seventh most popular and admired website offers freedom to gain better and accurate information by the experts. Next time when you visit another Wikipedia page, take the pride that you know the incredible history of Wikipedia and how the brand has united the human chain of millions on the world wide web.

Wiki, you are the lead-head in the knowledge society!