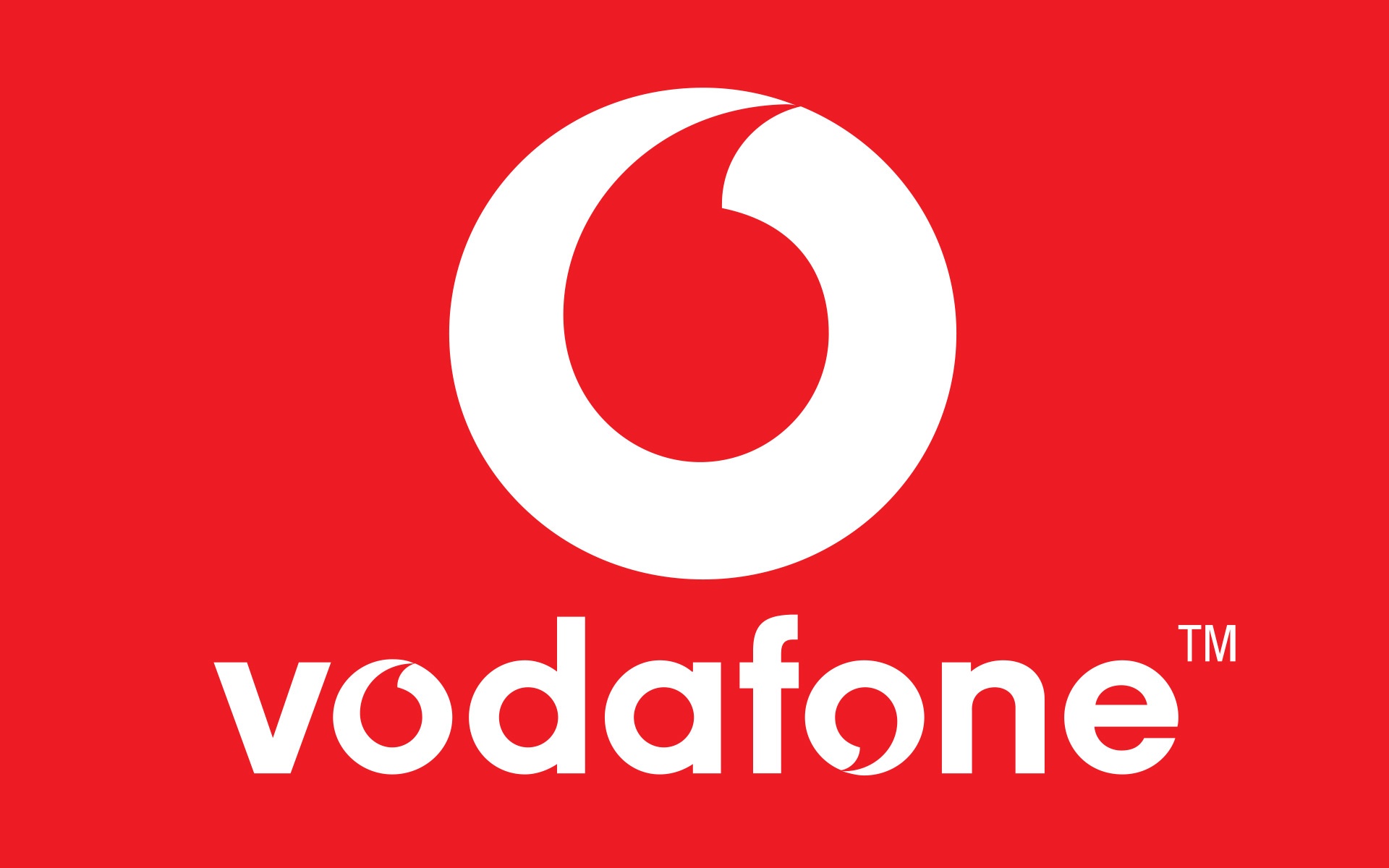 The mobile phone in your hand is one of the most useful technological innovations of 20th century. The original innovation goes back to the year 1876 when the European scientist Alexander Graham Bell invented the telephone. For decades the developments on telephones were a hot subject for R&D. Various forerunners came into existence before it got matured into the technology and shape of today’s mobile phones.

During 1918, German military started using wireless telephony in military trains. During World War II (1939 to 1945), the movable phones using radio signals were operated in defence automotive. 1940s witnessed the introduction of mobile phones in the automobiles. These car radio phones were huge in size and the network used to get interrupted while on call.  Then came the cordless phone invented by a jazz musician Teri Pall from California in 1965. Her invention which was based on radio signals had a signal reach up to 3.2 kilometers.  However, these ‘movable phones’ were fixed with the base-station installed in the automobiles.

The year 1973 was the breakthrough year. First time in the human history, on 3rd April 1973, a researcher of Motorola, Dr. Martin Cooper made the first call from a wireless, handheld mobile and spoken to Dr. Joel Engel of Bell Labs of AT&T, who was their competitor. The first mobile handset seen in the picture beside was 23 cm long and weighed 1.1 kg.

Rest is the history before you. Moving out of the moving cars and vehicles, becoming more and more handy, mobile phone became handheld of the moving humans’ hand in the later years.

That’s all about the invention of mobile handset. Now we will talk about a mobile service provider who made you connected through their networks; ‘Vodafone’.

If I ask the readers, “which cellphone service do you use?” a considerable lot would say ‘Vodafone’. Do you think it was easy to expand a business to such a huge market-share and reach out to your hands in a short span of 30 years?

Vodafone Group Plc. is a multinational telecommunication company originated from London. This is the company ranked as the second largest mobile communication company in the world, next to the largest player, namely ‘China Mobile’, an undertaking of Government of China. Vodafone has presence in above 60 countries through it’s direct operation or through partner networks whereas the China Mobile is operated only in 3 countries with combined huge populations; China, Hong Kong and Pakistan.

The origin of Vodafone goes to Racal Electronics group of Bracknell town, UK. The company was started in 1950 to provide consulting in radio communication and to build instruments for electronic instrumentation. 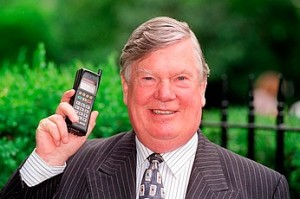 This story began at an Indian restaurant in UK, with someone named Gerald Whent, nick-named as Gerry Whent, who was a senior management executive in Racal Electronics group. In the year 1983, during the month of November, auctions were called by UK Government to award licences for the operation of mobile telephone services. Gerry happened to have a discussion with Jan Stanbeck, a telecom entrepreneur from Sweden, having his company ‘Millicom Inc.’, who wanted Racal to manufacture mobile equipment for the upcoming mobile network. But Gerry also was realized with the big opportunity in owning the mobile phone network rather than manufacturing the mobile equipment. As the result, Racal Electronics group in partnership with Millicom Inc. bid for the UK’s mobile phone license, and they won the bid. On winning the bid, the tough road of the journey came forth to build the cellular network and to formulate the branding strategy for the new mobile services.

Racal wanted a meaningful brand name for the mobile phone service, which was new to the market and a new experience for the consumers. The company went ahead and assigned a popular advertising agency ‘Saatchi and Saatchi’ to create the brand and branding strategy for the ever-new-service in the market. It was this agency that came up with the name “Vodafone” which means ‘voice-data-phone’; the phone that offers voice and data services. The invented brand-name is a coined combination of ‘Voice-data-phone‘, which was distinctly spelled as ‘Vodafone‘. The techno-speaking brand-name ‘Vodafone’ got finalized by the promoters. On March 22nd, 1984, through a press release, the brand-name ‘Vodafone’ was launched in UK. The events on brand introduction predicted that this new service would become hugely popular with the people on the move; businessmen, professionals and youth. The mobile phone services were launched by ‘Vodafone’ in UK on 1st January 1985.

Choosing a cellphone handset? How about a ‘Transportable’ one? 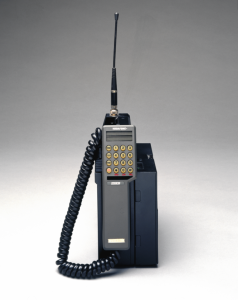 It’s nostalgic if you had used this mobile handset! Did we actually admire something so clunky? And to our surprise, the answer is ‘yes’. In 1985, people got their hands on the ‘Mobira Transportable’ which was a mobile handset launched by Vodafone. This handset was weighed around 11 pounds(approx. 5 kilograms), and this was a much better option than the fixed car phone. 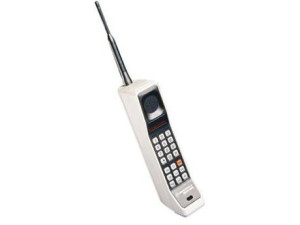 During 1985, a strong urge for mobile phones was noticed in UK, when Vodafone started offering Motorola 8000X, which had weighed 850 grams, and was more manageable, offering a whopping 30 minutes of talk time!

In the year 1991, the title of the company was changed to Vodafone Group Plc. The story of the world’s 2nd largest telecommunications giant, with headquarters in United Kingdom, Vodafone Group has been nothing short of phenomenal. With its major acquisition strategies and takeovers, the firm has marked astonishing achievements in the cellular service business worldwide.

Vodafone has a simple and clear logo history. Vodafone launched its first logo in 1984 as the introduction of the brand-name. This was a unique design of the then times having the brand-name placed in italic black blocks with a thin line striking through the brand-name, symbolically depicting the transmission of voice and data, with a hexagon dot at the end. The hexagon symbolized care, reliability and dependability, the brand wanted to share with its subscribers. In the start of 1997, the logo was changed into deep red and the color added a pinch of love and passion.

In later 1997, Vodafone logo underwent a strategic transformation in its design. The device of speech-mark was introduced as its logo. The speech-mark was placed prominently on a white circle with a background in the shape of a sim card. The brand name ‘Vodafone’, was again ornamented with the quotation-marks, and was spotted at the bottom of the motif in a unique fashion. Having designed exclusively with the speech-marks, the logo symbolized voice communication, that the brand deals with.

The year 2006 witnessed another face-lift to the Vodafone logo. Maintaining the device of the speech-mark, it underwent a graphical make-up to make the brand-name more prominent in the display. The speech-mark with a bulbous effect is placed on a gray circle to highlight the visual dimensions of the icon. The logo with the brand-name has come out truly projective, promoting the essence of services it stands for.

And, the credit for the visual effects of  the Vodafone logo designs goes to the renowned media agency ‘Saatchi and Saatchi’.  Saatchi and Saatchi is a worldwide advertising agency founded in London and presently having its headquarters in New York.

Looking back at the winning history, Vodafone did spread its services to most of the globe and became a worldwide renounced brand. The powerful brand holds a story of innovation and award-winning customer service in the history of telecommunications in the modern era.