Once upon a time, there used to be cars manufactured only for riches in the society. A man then wanted to make the cars a common commodity for average citizens. That was Adolf Hitler. During 1930s, an average German could not afford anything more than a motorcycle. That’s when Hitler propagated the idea of making a car that was affordable for every German. Thus, making automobiles a common commodity instead of them being exclusive to the cream layer of the society.  Since most automobile makers were making large expensive cars for the high net-worth consumers then, this progressive thought indeed sprouted up. The idea laid down by Hitler lead to the establishment of the brand called “Volkswagen” (pronounced as ‘Folks-Wagen’), a German automobile brand, in German language which means “The People’s Car” or “The car for the people”. 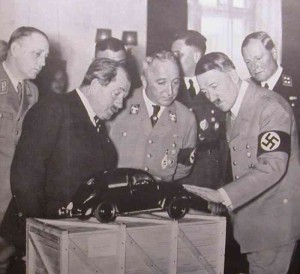 A challenge to drive ahead..

Hitler wanted to do for Germany what Ford did for the car manufacturing industry in America.

During 1930s, about the possibility of inventing an economically viable car manufacturing, he once said, “I know that I am confronting German industry with a major challenge, but I am also aware that a German is no less capable than anyone else in the world. And problems which have been solved in one part of the world must also be capable of a solution in Germany!”

<<Hitler with a model of an economic car

The project was for the development of an affordable and efficient car that could sell for less than 1,000 Reich Marks ($140 at that time). To make shape the car of his dream, Hitler invited the Austrian automotive engineer Ferdinand Porsche. Porsche had such track in the past of designing smaller cars than the ones that made by the elite brands like Daimler-Benz and BMW. Although unsure at first, Porsche decided to take up the challenge. Budget for manufacturing, operating and maintenance were to be sliced down. Finally, the people’s economic car was invented for mass manufacturing. On 28th May 1937, the government of Germany run by National Socialist German Workers’ Party(NAZI) of Adolf Hitler, formed a new government-owned automobile company named as “Gesellschaft zur Vorbereitung des Deutschen Volkswagens mbH”. Later in the same year, the company was renamed as “Volkswagenwerk, or ‘People’s Car Works ‘. Volkswagen laid cornerstone to the largest automobile factory in Wolfsburg, Germany, with a capacity of mass producing 1.5 million cars in a year. ‘Volkswagen’ become an icon for western German generation during 1940s. The automatic fuel injection and automated transmission came into effect in 1961. The Volkswagen’s product line expanded and made inroads into every major automobile market across the world. 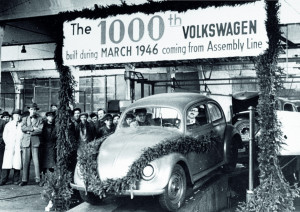 <<This is the 1000th car manufactured by Volkswagen

At first, Hitler intended to use these cars for military purposes only but they later achieved a wider goal of catering to the masses. Post the World War II, the most famous model of the company branded as “Beetle’ gained fame far and wide and has gone on to achieve an iconic status till date!

Look at this cute, bubble-headed Volkswagen model that used to be shown behind the service invoices with a service statement; “Always ready to serve you and your Volkswagen”. The slogan meant deeply how the brand was keen to provide the best to it’s consumers. 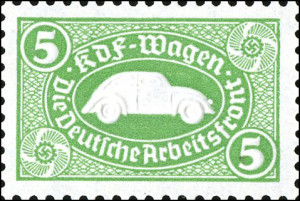 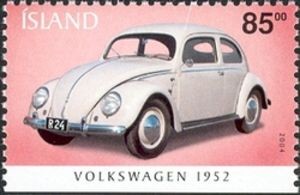 Volkswagen represented the mass of the society and re-defined the whole generation’s attitude to living. And the brand found it’s way onto German stamps in early years. This lead to a massive popularity for the brand.

Germany was hit by World War II, so was Volkswagen..

As the result of World War II which ended on September 2, 1945, Germany was devastated and divided into four sectors. Three regions under the control of Britain, France and America combined to form West Germany and the sector under Soviet Union(USSR) became East Germany. Factory of Volkswagen in Wolfsburg, which remained in good shape even after being a target of allied bombs during the war, was in the British custody. They plan to dismantle the factory and ship it to Britain. Fortunately for Volkswagen, no British car maker was interested to buy the factory. Volkswagen, under the control of the British military, then started manufacturing cars for British army in December 1945. Later in 1949, when the British, French and American hold was withdrawn from the land of Germany, the company, re-named as ‘Volkswagen GmbH’, was back in German hands.

The Logo and how it evolved! 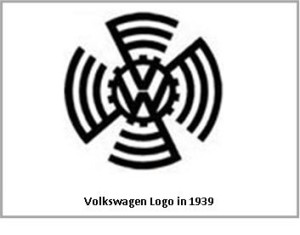 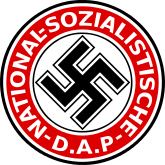 In 1939, the Volkswagen logo that was designed had a ‘V’ and a ‘W’ in the center encircled with a design inspired from the Nazi Party emblem clearly representing its association of the brand with the party. 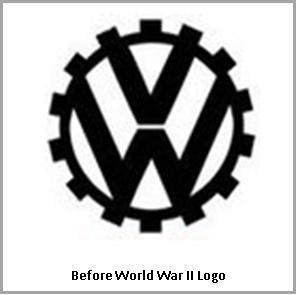 Later in an office competition, an employee created a logo which was adopted by the company for a long time until the end of the World War II.

After the World War II: 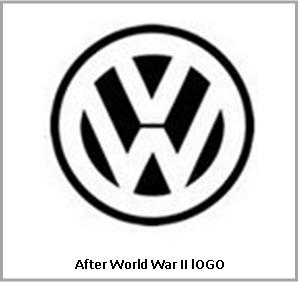 Post the WW- II, as Britain took over a the region of Germany where Volkswagen was rooted, they demanded the logo be changed to remove the Nazi fringes from the design. With the modified design, the VW logo looked much sleek and clean, giving it a more corporate look than before.

Evolution of Volkswagen logo through colors and years.. tryst of  ‘V’ and ‘W’ continues…

The Volkswagen logo underwent various design changes with time. From the black and white to blue over white, later white over black and finally white over blue.

“Das Auto” – the slogan means it all!

Volkswagen’s brand claim, ‘Das Auto’ in German,  was unveiled at the Frankfurt Motor Show in September 2007. ‘Das Auto’ means ‘The Car’, is a positive and bold brand claim that expresses the company’s ambitious nature. This slogan underlines the group’s vision for the future to be the most innovative car brand in the world.

Through these brands, the Volkswagen group promotes environment consciousness and ecological sustainability and uphold the cutting edge technology through it’s innovations. 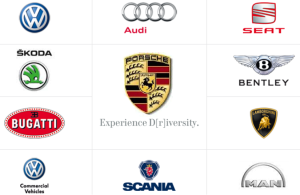 Forever staying true to its founding ideology of being a People’s Car, Volkswagen has indeed been an inspiring story of how economical sustainability can be coupled with product and service quality. This task of carrying quality and sustainability can beautifully co-exists.

History affirms Adolf Hitler as a most notorious dictator world has ever seen, but his pet project of “people’s car” carry a lasting sensibility for consumer’s need to live comfortable and lead a life of conveniences.