International Business Machines Corporation, better known as IBM, is the American multinational technology and consulting corporation and has a very famous logo. The logo is written in blue with 8 crossbars making up the name IBM. There is a hidden meaning behind IBM logo and we shall learn more about it as we go through its journey in the history.

IBM was not born as IBM. There were many predecessor companies that used a series of logos before the advent of IBM.

It all began in 1889, with the International Time Recording Company (ITR). The company produced mechanical time recorders that were patented by Willard L. Bundy in 1888. In 1911, the company got merged with another enterprise called Computing-Tabulating-Recording Company.

The three companies, International Time Recording Company and the Computing Scale Company as well as the Tabulating Machine Company were merged together in the year 1911. Charle R. Flint, who was a financier, had directed this merger and formed Computing-Tabulating-Recording Company (CTR). The famous motto of the company “Think” was the brainchild of Thomas J. Watson, the then General Manager of CTR, who placed a lot of emphasis on research and engineering.

The Computing-Tabulating-Recording Company(CTR) adopted the name International Business Machines Corporation in 1924. The rococo styled letters that formed “CTR” were replaced by the words “Business Machine”. It was written in the shape of a globe. These words were horizontally surrounded by the word “International”in the center. However, this logo did not get connected with the consumers too well. It had a cold, bureaucratic image rather than a friendly, approachable image. So, the company had decided to create a more user-friendly image.

Introduced in 1947, IBM, the abbreviation for International Business Machines, soon became an international brand and to carry forward its reputation, from punch card tabulation to computers, they reinvented the new logo. It was also to gather a more friendly image for the company. The new logo was first introduced on the masthead issue of Business Machines on 1st January 1947. The globe was replaced with IBM written in Benton Bold typeface.

In May 1956, Tom Watson Jr. took over as the position of Chief Executive of IBM from his father Thomas J. Watson Sr.. The move called for a subtle change in the logotype of the company. Paul Rand, a noted graphic designer, replaced the Benton Bold with City Medium typography. This gave the logo a grounded, balanced and solid appearance.

In 1972, the company logo underwent another change. This new logo was again designed by Paul Rand. The solid letters were now written using horizontal stripes. These stripes stood for speed and dynamism. The block letters indicate authority, without alienating the consumers. Also, the logo looks as if it is made by a computer, rather than hand-drawn.

The hidden meaning behind the big blue logo of IBM lies in the white lines passing through the letters. The lines form the equal sign, that represents equality.

The logo-transformation of IBM in a glance: 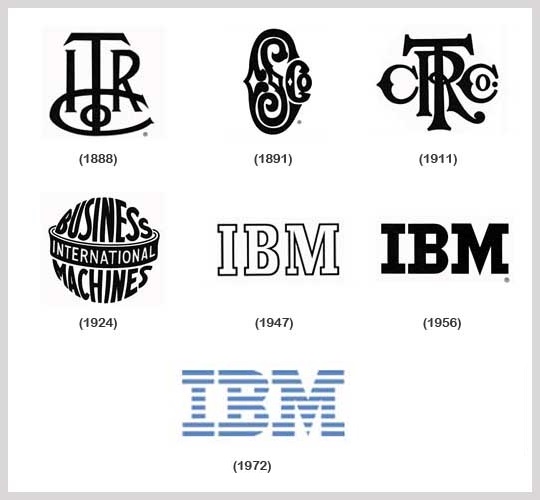 Marking its 100 year anniversary, Watch the achievements and history of the prodigious global initiative here:

The term ‘Big Blue’ stands for the big share the company holds in the market and blue is the official color of the 8-bar IBM logo. IBM logo is a mark of quality, of trust and the strong commitment of the company to maintain high standards.

Adding more value to it’s brand story, the brand ‘IBM’ stands 5th in the World’s Most Valuable Brands ranking with a brand value of $ 47.9 billions; calculated in November 2014, report by Forbes.