Here, continues the Brand story of ‘Mercedes-Benz’ from the previous post..

In our preceding post released last week, we had discussed the history of evolution of ‘automobile’ as an invention, as a life-style and as an industry in Germany.

Gottlieb Daimler, the inventor of first high speed engine in 1883, received a German patent on a three-wheeled gasoline-powered vehicle in 1886.

Karl Friedrich Benz, the inventor of first ever automobile, also was granted with a patent  for the first ‘Automobile fueled by gas’ during 1886 in Germany.

Finally, on 28th June 1926, Benz & Cie and Daimler-Motoren-Gesellschaft (DMG) merged and formed a single company ‘Daimler-Benz AG’ to lead ahead the automobile industry world-wide with the world’s most admired automobile brand- “Mercedes-Benz”. Rest is the winning history of the star brand.

Since the marriage of Mercedes-Benz, the brand stood steadfast for highest standards in quality, class, cutting-edge engineering and sheer brilliance among the automakers across the world. Today the brand that established across 200 plus countries produces luxury automobiles, buses, coaches and trucks. The brand’s slogan, “The best or nothing”, emphasizes the avant-garde position of the brand on it’s ground. Mercedes-Benz is a part of ‘German Big 3’ automobile manufacturers along with BMW and Audi.

<The merger certificate of the merger between Daimler-Motoren-Gesellschaft and Benz & Cie. Year: 1926

The history of the Brand ‘Mercedes- Benz’ has the thick antiquity of innovation, competition, quality and above all die-hard dedication to mark a history as two separate brands; Mercedes and Benz. The time-line here shows the introduction and growth of  Mercedes and Benz separately as two brands and then the union of the two making a single coined brand ‘Mercedes- Benz’.

During the year 1902, Daimler-Motoren-Gesellschaft (DMG) went ahead and created the first ever design for the brand Mercedes to be used on their vehicles. The brand name ‘Mercedes’ had been placed in a stylish manner, beautifully combined in an oval shaped block.

1909 is the classical year in the history of this iconic logo. This is when Daimler introduced a 3-Pointed Star with 3 dimensional effect, illuminating a fascinating interplay between light and shades. The 3-pointed star was originally drawn by the founder, Gottlieb Daimler on a post-card sent to his family. Later, the 3-pointed star was absorbed by his sons, Paul Daimler and Adolf Daimler, as the trademark to symbolize the efficiency of their engines for the use on land, sea or air. Even after 100 years, this design stands obvious in the future versions of the logo introduced by the ‘Mercedes’ brand.

1909 witnessed introduction of another creative idea for the icon by the competing brand ‘Benz’. In this circular logo, the brand ‘Benz’ was written in a circular shape with a ring-shaped boarder beautifully decorated with a  laurel wreath. (A laurel wreath is an arrangement of the laurels leaves a circular shape, as seen in the adjacent logo). In 1909 when Benz & Cie. filed an application for this presentation to the Imperial Patent office to register it as a trademark .

The year 1916 witnessed another transformation of the Mercedes motif. Daimler introduced its 3-Pointer Star on a circular frame with the brand name Mercedes written at the bottom. 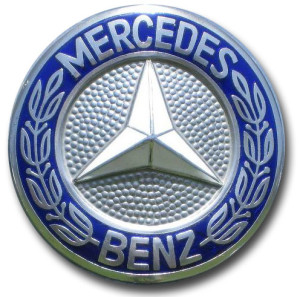 1926 marked the biggest year in the making of this prestigious brand. It was on 28th of June, 1926, Daimler-Motoren-Gesellschaft (DMG) and Benz & Cie. merged to form the united single company ‘Daimler-Benz AG’.

1926 witnessed the merger of the two big brands- Mercedes and Benz. ‘Mercedes’ of DMG and ‘Benz’ of Benz & Cie. were combined to formulate the invaluable brand, ‘Mercedes-Benz.’ The new signets were created for the Mercedes-Benz brand.

The new brand had a new design, but by absorbing the artistic elements of the persuasive logos of earlier Mercedes and Benz. Fixing the 3-Pointed Star of Mercedes logo prominently at the centre with the circle-shaped laurel wreath of Benz logo as a boarder, accompanied with ‘Mercedes’ lettering at the top and ‘Benz’ lettering at the bottom of the ring, did the magic of creating this enormously successful brand-presentation for Mercedes-Benz. The Mercedes-Benz trademark was created on 28th June 1926. 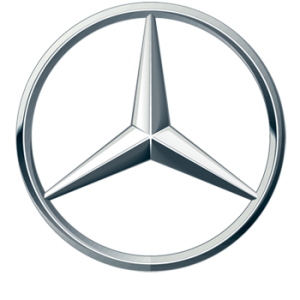 Finally, the star was born. New Mercedes-Benz logo introduced in 2008 consists a 3-Pointer Star with a circled boarder. This 3 dimensional design meets the highest standards of meaningfulness, elegance, style, quality and precision. The best part of the new presentation is that the symbolic 3-Pointer Star stands for its master brand without even inscribing the brand-name on it. Ultimately, this highly intellectual, characteristic trademark represents its brand in the utmost meaningful fashion.

Along with its meticulous engineering, Mercedes-Benz is admired for its everlasting innovation. Since inventing the car in 1886, the automobile legend has never stopped reinventing. With little changes in the Mercedes-Benz trademark over the decades, it still adorns the Mercedes vehicles, representing the safety and quality on roads everywhere. Today, the name ‘Mercedes-Benz’ is synonymous with innovation, tradition and the future of the efficient and luxurious automobiles.

Mercedes-Benz, the star of luxury on road, races ahead with the state-of-the-art technology from Germany and keep setting the milestones in the history of modern vehicular innovation. The star makes the journey a gratifying experience and guides one to another awesome destination.