Subway: wow! choice of health in a fast-food package!

Want to bite something good after a long work-day? or Hungry after a boring lecture in college? Do you find yourself having a long submarine sandwich, which is supposed to a be a healthier make of fast food? Isn’t it the sandwich from the shop that says ‘eat fresh’? If it’s fresh, healthy long sandwich you are having, you are at a ‘Subway’ outlet. Subway is one of the most easily recognizable and popular American fast food restaurant that has franchises in about 107 countries. Do you know the history of the big food brand being ‘Subway’? There is quite an interesting story behind this largest- single-brand-global-restaurant-chain which serves subs and salads across the glob.

Fred DeLuca is an American businessman. He is the co founder of Subway chain of Sandwich restaurants. He was an alumnus of University of Bridgeport in United States. All of it started in 1965 when Fred borrowed $ 1,000 from a family friend, Peter Buck and partnered together, and created a brand history called “Subway” in the later times. Fred was a man with clear vision since opening of the first store. He believed that the brand will continue to grow, provided it is run by people who own the passion to delight their customers by offering friendly services along with flavorsome sandwiches. High quality product, providing excellent customer service, keeping operating costs low and finding great locations are four key operational guidelines the Subway team followed to make this gigantic brand a global business reality. 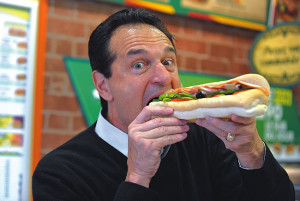 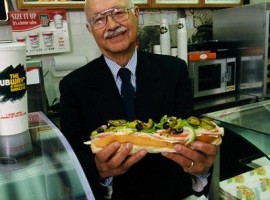 The story goes back to the teen-aged Fred DeLuca during 1965. The young Fred DeLuca was a true entrepreneur with big dreams. He was an aspiring medical student who wanted to earn enough to pay fees for his medial college. In order to earn the money for his studies, someone suggested DeLuca to start a sandwich shop. This someone was none other than Dr. Pete Buck. It was he who lend DeLuca a thousand dollars to start his first sandwich shop. 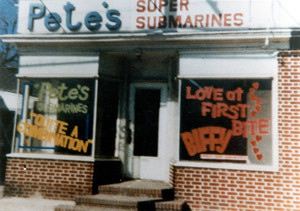 DeLuca was just 17 years old when he started his first sandwich shop in Bridgeport, Connecticut, a small state in United States, in August 1965. On the first day of the opening, he managed to sell more than 300 sandwiches. The first shop was called as “Pete’s Super Submarines” as it was Pete Buck who financed to start-up the store. The use of the term “Submarine” and later on shortened term “Sub” for the Subway sandwiches are derived as the bread roll used to make these sandwiches resembles the shape of a submarine.

Upon the successful start, the founders then set a goal of opening 32 stores in 10 years. In 1966, they formed “Doctor’s Associates Inc” as the name of the holding company to operate the restaurant business. The name has nothing to do with any medical organisation, but, it was from DeLuca’s goal to earn enough for medical college. And, Buck was already holding a doctoral degree in Physics. 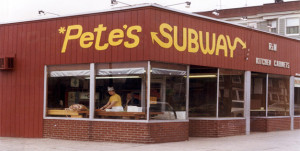 The founders wanted to go all way out to create a chain of their sandwich stores. Dick Pilchen was the first employee of Doctor’s Associates Inc. He was  appointed to market the concept of submarine sandwiches. Pilchen suggested  about changing the store name. As the brand was aiming to attract the young college going crowd, the name had to have a hipper, catchy feel.  Pilchen suggested to add the word ‘Subway’ to the name. Soon the “Pete’s Super Sandwich’ was renamed as “Pete’s Subway”. This was the time the brand-name ‘Subway’ was first introduced.

Few years passed and the brand caught well with it’s young consumers. The founders felt that making the name more shorter and catchy would make it more appealing as a brand-name. The brand-name was shortened to just ‘Subway”  with a new  logo in 1968. The logo underwent a major change.The arrow shaped tales of the first and finishing alphabets ‘S’ and ‘Y’ created a unique artistic element to the new brand presentation. The new logo was drawn in a black, capsule- shaped background. The first three letters were written in white and the last three in yellow. The the letters ‘S’ and ‘Y’ woth arrows signify a subway and the arrows signify the directions of a subway. .

1974: Start of the franchising revolution

By the year 1974, the duo-promoters owned and operated 16 submarine sandwich shops throughout Connecticut. Realizing they would not reach their 32 store goal within the set limit of 1975, they thought on re-working their strategy. They finalized a master plan to franchise brand to other entrepreneurs, thus replicate their success through their Subway franchisees. This re-modeling of business made the ‘Subway’ going beyond all targets and having around 44,000 stores as in 2015.

During the start of 2000, the world turn towards the idea of eating fresh, eating organic and eating healthy. The brand ‘Subway’ took the call. Subway stores made the big changes to its menu by introducing a line of sandwiches featuring seasoned breads and gourmet sauces.

During 2002, a new logo was introduced with colors of nature and freshness. The punch-line “eat fresh” said it all. The use of green color in the Subway logo helped convince the consumers that Subway offers healthier sandwiches as opposed to fatty fast foods. The white symbolizes pureness and yellow color stands for joy, optimism, richness and happiness. The current logo of Subway was designed by Ruth Woyciesjes, Director of Creative Services for Subway Restaurants. 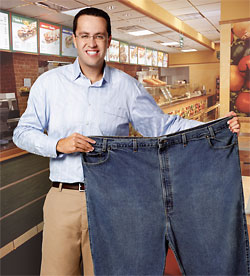 The concept of ‘Eat Fresh’ took a more dramatic turn, when the company marketed Jared Fogle’s idea of weight loss with Subway’s lower-calorie options through extensive TV commercials. Jared Fogle was on a self-imposed weight loss mission, who decided to eat just the Subway’s lower-calorie food to loose his extra pounds. He found he did lose weight around 250 lbs.(aprox. 113 kg.), the healthier way. A book on weight loss through healthy diet  “Start Small Finish Big” by the Subway founder, Fred DeLuca, was published too.

Subway is one of the most easily recognizable brands that stands high for brand reputation. Today, this huge brand is world’s largest sandwich chain. The brand’s dedication to promote vegetables and fruits make it a unique concept in fast food. Having said the success drive of the brand ‘Subway’, with around 44,000 restaurants across 37,000 locations around the world, Subway had changed the landscape of the fast-food industry.

Wow! Choice of health in a fast-food platter; subs or salads, it’s your choice!