He winked, smiled and saluted; Who’s he? 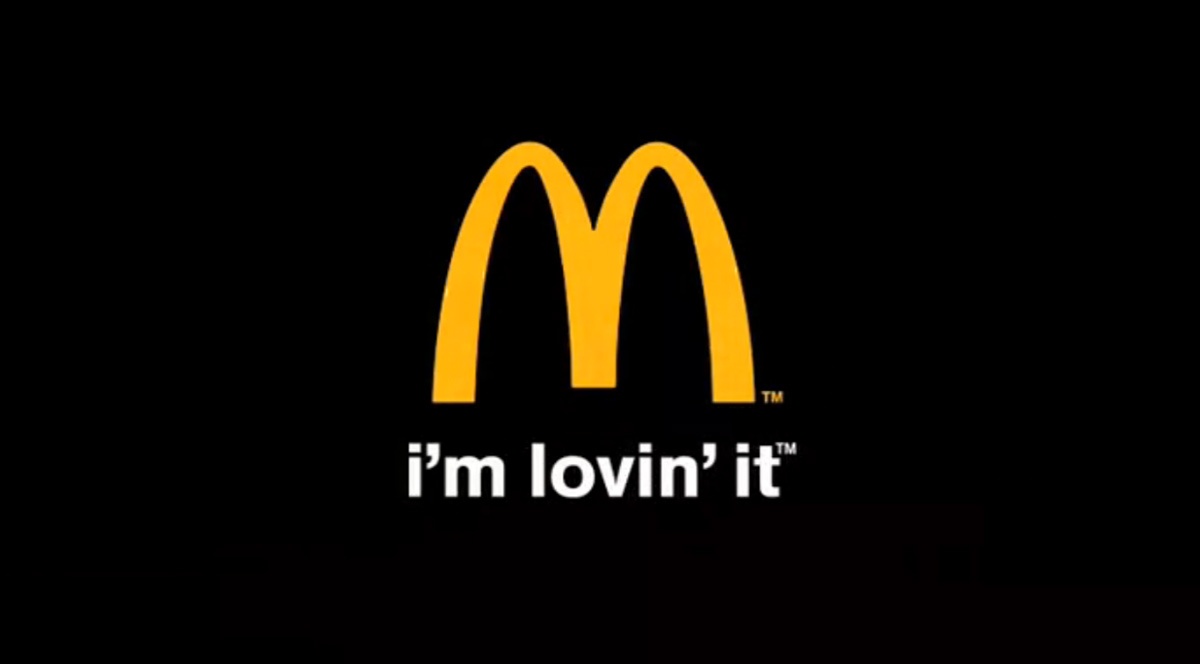 With the huge shopping bags, calories burnt wandering in the mall, I sat down in the McDonald’s store. Every bite of the French fries is like ‘playing touch me not with heaven’. The mustard paste from the burger dripped down.. but at this point, who cares! Now, I started thinking about this gigantic brand called “McDonald’s” and dug into its history. Here is the tale of the huge firm that brought the whole world together to a small restaurant.

Oh! bros, you are the sole reason for my happy tummy

Once lived two young brothers, Richard McDonald (Dick) and Maurice McDonald(Mac) who moved to California from New Hampshire to make their fortune. They were inspired from a motion picture company where they used to work as stagehands. The fire inside them made them open a movie theater. Somehow, the movie theater didn’t turn out to be a profitable business, they had to shut it down. Loads and lots of struggles went in and they shifted to their next venture, a restaurant.

The first ever version of McDonalds was opened at 1398 North E Street, San Bernardino, California. The birth date of the restaurant “McDonald’s Bar-B-Que” was on 15th May 1940. The menu had varieties of  barbecues, hamburgers, french fries and beverages. On weekends one would for sure see more than 100 cars parked near the restaurant. 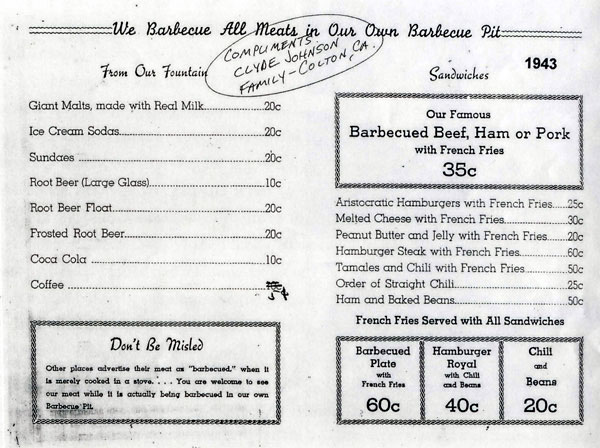 To the Mc Donald’s fans heartbreak, the restaurant was demolished during 1976 and sold to Juan Pollo chain of restaurants. You can see the headquarters of Juan Pollo restaurants chain, Route 66 and McDonalds Museum there.

… and soon the third ‘bro by bond’, joined 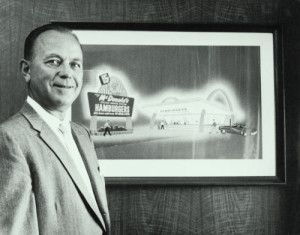 As a youngster, Raymond Albert Kroc (nicknamed as “Ray”) worked as an ambulance driver during the 1st world war and later as a paper cups salesman, multi mixer salesman and as a piano player in his leisure. The golden hand of the time knocked his door during 1954; he received a big order. To his surprise, he took an order of eight multi mixers for a restaurant in San Bernardino, California. He met someone exceptional there; that was his first meeting with McDonald brothers. 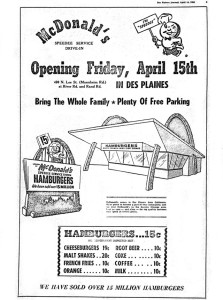 Incredible history of the logo:

The firm represents more than fast foods. The logo is very familiar as one of the top brands on the globe. It has become a synonym for globalization and the American food culture. The very famous fast food brand is recognized by the golden arches today all across the planet. But do you know there are many ancestors to the golden arches. Here you go!

1940: It was on 15th May 1940, a pretty little shop is opened called “McDonald’s Famous Barbecue” in California.  It started cooking tasty barbecues and till 1948, its name remained the same.

1948: Through years McDonald brothers observed that the major demand in their outlet is for hamburgers. During October 1948, they modified their menu with hamburgers, cheeseburgers, french fries, shakes, soft drinks, and apple pie. And, “McDonald’s Famous Barbecue” is renamed as “McDonald’s Famous Hamburgers”. The introduction of the revolutionary “Speedee Service System” by McDonald’s in 1948 had written the first page in the history of fast-food-restaurants. 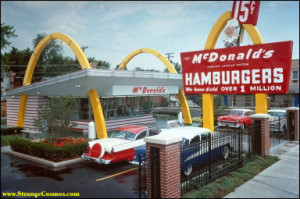 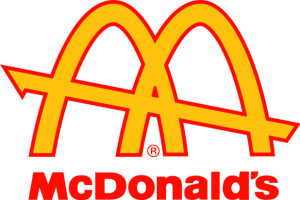 Finally, in 1960, the restaurants were renamed to just “McDonald’s” and the new logo was introduced. This is the start of the historic ‘Golden Arch’ logo stood tall all trough the business history of McDonald’s ahead. On 4th of May 1961, the first application for registering the trademark  “McDonald’s” was filed in US.

The design of the gigantic arches at their restaurants-front was designed by an architect from Fontana, Stanley Clark Meston, to project an eye-catching appearance for the restaurant. These arches have became the iconic symbol for the McDonald’s outlets. Inspired by the architecture of these arches, the first sketch of the long-standing corporate logo “Golden Arches” was designed, which depicts the starting alphabet “M” of McDonald’s.

1968: The designer felt the need of more creativity. Highlighting double mansard-roofed architecture of the restaurants, this logo has become so famous that it is still used on few doors, rugs and drive-troughs at rare stores. During 1970s,  slogans like, “Forever young”, “What you want is what you get” and “Have you had a break today?” were sang along by the foodies.

2000: During 2000, the restaurateur changed the background color of the mansard roof to red.  This is when a new punch-line was sung as “We long to see you smile” and won many hearts. 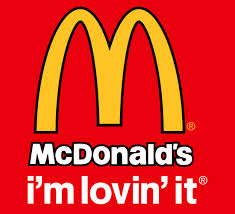 2003: It is during this year, the logo and the punchline were completely reinvented. The slogan “I’m lovin’ it”, what we know today, was introduced along with the McDonald’s logo. The word “McDonald’s” is brought under the golden arches and the golden arches were redesigned. It is during this year, Heye and Partner GmbH, a media agency from Munich, Germany, created the successful and famous advertising campaign in the history of Mc Donald’s. The campaign with launch of the punchline, “I’m Lovin It” was introduced first in UK, Australia & USA and in no time, spread through the world. 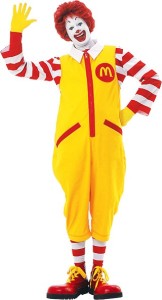 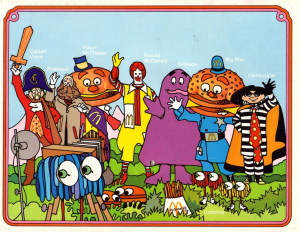 ^ Click on the picture above to know the characters

The “Speedee” was the first mascot used by McDonalds during the period 1948 to 1967. The Speedee grew old and the young and handsome clown “Ronald McDonald” took the central stage . In the same time, the firm filed a U.S trademark on the clown faced “Ronald McDonald”. He is the primary mascot of the huge food chain. He lives in the fantasy world called ‘McDonaldLand” and he has many friends too! Have you ever visited his friends? Hamburglar, Fry-kids, Mayor McCheese, Grimace and Birdie are his yo yo friends.

Since 1940s, the happy restaurant spread love and smiles all across the world. It is the inevitable logo of the golden arches that created memories of joy for everyone who stepped in.

Winking, waving and smiling at you, Ronald stay-up through McDonald’s outlets waiting for your next eat-up. Next time when you visit there, don’t you click a picture sitting beside the McDonald’s Ronaldo-man saying ‘Hello’ to you?