The whole month of January was so easy on me until when my mom found out that I have gained 5 Kgs. To inspire me run, jog and play basket ball in the just-cleaned backyard, she did everything she could. Well, mothers always know which action can cause a reaction! A big huge gift on the table, soothed my heart but pained my muscles. A collection of Nike shoes,  Nike work-out wear, Nike cap and Nike sports watch! Wow, I bet I shall run and burn calories the whole day for these gifts! At least they inspired me to! Wondering how a small swoosh mark has changed my yo yo day into a healthy one, this is how the brand, swoosh, and Nike has made a difference to millions across the globe!

Nike has an inspiring history, of the coach and the middle distance runner 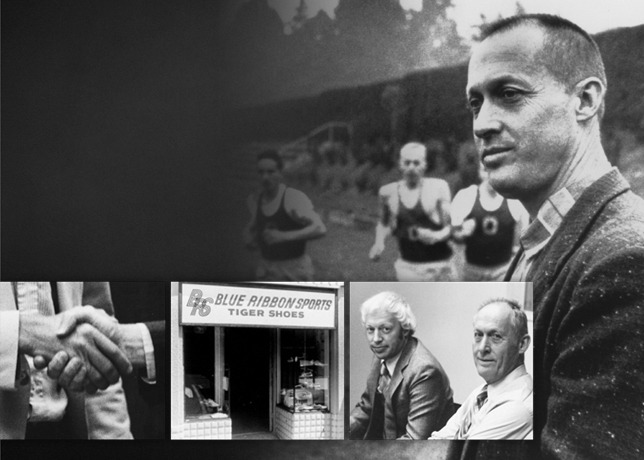 Blue Ribbon Sports(BRS) was established in 1964, January by the founders Phil Knight and Bill Bowerman. Before they started a firm, Knight was a track athlete into middle distance running and Bill was his coach. They used to import Japanese shoes ‘Onitsuka Tiger’ and market the same among the athletes. When the founders decided to manufacture their own brand of shoes, Nike took birth. In 1971, Blue Ribbon Sports decided to launch its own brand, which first appeared as a football boot called Nike, and was manufactured in Mexico. Nike Inc., as the world knows today, is an established sports shoes, leisure merchandising and sports equipment manufacturer.

Have you ever thought what the word ‘Nike’ actually meant? 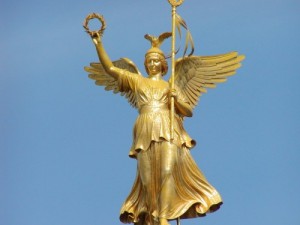 “Nike” is the name of the goddess of victory in Greek mythology. The sports goods’ brand “Nike” is named after the goddess Nike, depicting that the Nike brand gives it’s user victory. And, the Swoosh logo of Nike is the graphical representation of a wing of the victory goddess.

Nike, pronounced as”naiki” in America and as “naik” in Non-American states, offers a wide variety of sports accessories for the twentieth century sportsmen. The greatest athletics in the world are heightened with victory and ambition by the passion icon, NIKE.

The logo that made the difference:

One of the secrets for the firm’s success is the outstanding brand name and the astounding logo it is blessed with. Of course the logo has carved the brand in the people’s mind so well that none today is illiterate about the Nike brand. During the brand launch, a new and eye-catchy logo was essential. If it was you, what logo you would have created for Nike? Carolyn Davidson had so many motifs in mind. She is the one who created the Nike logo.

Believe it or not, the freelancer is remembered forever! 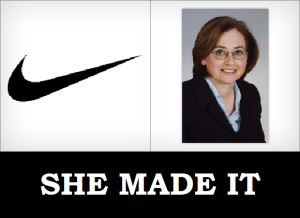 Carolyn Davidson was delighted to receive $35 as the payment for her work. She met one of the founders, Phil Knight in the accounting classes in the college. Phil was a professor who used to teach accounting. He overheard Carolyn speaking about not having enough money with her. He offered her few freelance jobs for his business, Blue Ribbon Sports. That was the order to make the Nike logo and the bill for the logo making was of $35.

During September 1983, Carolyn benefited more. Phil appreciated her for the success of the firm. He presented a golden ring with a design of swoosh and a diamond on it. As a token of gratitude, she even received 500 shares of NIKE i.e. half a million dollars if counted today. The logo just waved the sports world and swooshed the customers with new dimensions. 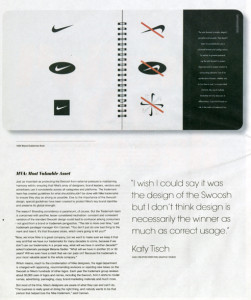 The logo sprouted up from a mere graphic design student from Portland State University. Initially she had developed a dozen of creative logos for Nike and presented in front of the founders at the company’s then headquarters in Tigard, Oregon. The Swoosh motif attracted the most. 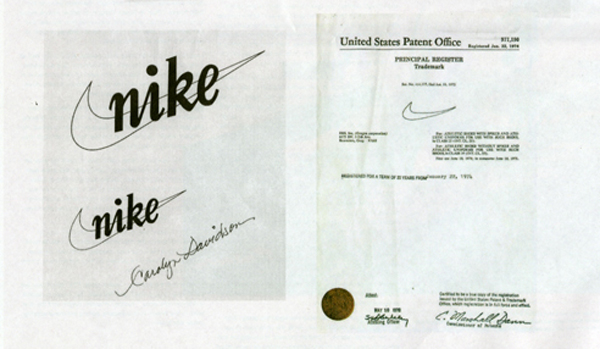 The symbol of Swoosh was first used by Nike on June 18, 1971 and was registered with the US Patent and Trademark Office on 22nd January, 1974. Adding the strength of its Intellectual Property portfolio developed through years, Nike owns around 540 patents by the end of 2013. This, of course means a lot to its  Research & Development.

Be it a wing or victory, it rocked the athletic world

In 1972 June, when the shoes were introduced at the field Olympics, the logo of Swoosh got in as a topic on discussions. It is an artist’s representation of a wing of the Greek goddess ‘Nike’. The swoosh is believed to be a blessing that gives audacious powers and strength to win. Reaching 1995,  just the Swoosh was enough to represent the brand. Today you can cite many sign boards of Nike only with the Swoosh, not mentioned with the brand name ‘Nike’. The Swoosh has become a corporate logo and a prestigious identity of Nike.

In short time, the brand has become vigorous and spread across the world. Much new advancement has taken place in the product range too. For instance, ‘Nike+’ is an ecosystem of digital products. You can now compete and excel in your fitness sessions by measuring your pros and cons from the sports data.

The  credit of having the one of the world’s well-known slogans goes to Nike Inc. for “Just Do It.”.   It was in 1988, this sporty slogan was created by an advertising agency called ‘Wieden+Kennedy’ based in Portland. The agency credits the inspiration for the slogan “Just Do It” to Gary Mark Gilmore’s last words. The story goes this way. Gary Mark Gilmore was an American criminal who gained death sentence for two murders he had committed in Utah. Gilmore was executed in 1977 by the firing squad in the prison. He was tied to the seat, with a wall of sandbags behind to trap the bullets. Just before firing the bullets on him, when asked by the priest for any last words, Gilmore simply replied, “Let’s do it.” In the history of advertising, Gilmore’s last words coined a world renowned slogan “Just Do It” which has reached out to millions of hearts across the globe.

The logo and the slogan had won many best creative awards.  ‘Just Do It.’ is placed in the top five advt. slogans of the 20th century. Nike is an example of a perfect logo that directed towards a successful branding. Nike flew with the fastest wings towards victory!

Ah, it’s stop to blog and time to jog. The Nike inspiration will keep my fire on- Just Do It!