SBI: a global brand from the heart of India India celebrates her independence. In 1947 India got freedom from British colonial ruling. 15th of August is the Independence Day of the largest democracy in the world; India.

Having about 1,00,000 years of history, India has given a lot to the humanity… owning above 5000 plus years old developed culture (Harappa, one of the most ancient civilization in the world), India did consecrated the humankind with numerous inventive contributions.. Name a few;

… the contributions India had passed on to the humanity is long to list.

The Economy of India stands as 7th largest in the world in GDP (‘Gross Domestic Product’: Total value of goods and services produced by a country in a particular year) and 3rd largest in the world in PPP (‘Purchasing Power Parity’: The comparison of purchasing power of currencies in two different countries for the same good). And, India had overtaken China and became the fastest growing economy in the world during the last quarter of 2014.

In such a vibrant scenario for India, in the occasion of Indian Independence celebration, this post is our tribute to the long lasting civilized India. And, here we talk about a powerful brand from this country; State Bank of India.

The State Bank of India, often referred as SBI,  is one of the most successful banks in India, which has a history spanning over a two hundred years.

The origin of State Bank of India clocks back to the year 1806 when the Bank of Calcutta was established. Three years ahead in 1809 January, the title of the bank was changed as Bank of Bengal.

Later, the Indian Parliament initiated the amalgamation of 3 banks namely Bank of Bengal, Bank of Bombay and Bank of Madras to create a single bank entity namely ‘Imperial Bank of India’ which came in effect on 27th January, 1921.

The first SBI logo came into existence in 1955. The logo had a Banyan Tree in a round coin form, with the words “State Bank of India” itched in English, the business language and Hindi, the national language of India. The year of establishment was printed just at the roots of the Banyan Tree. The bank was nationalized on 30th April 1956. The banyan tree in the logo meant the banks strong roots that spread wide and the broadening branches of the tree indicates growth, success and stability.

There was a wise and valid reason behind the change of the Banyan tree logo of SBI. In the year 1971, a new logo was adopted. The banks logo has a very interesting story and a deep meaning behind it. Let’s learn more about SBIs present logo and the history behind it’s design.

It’s said that people of the brand thought that the banyan tree was not appropriate for the bank’s identity, on the very reason that no other plant grows within the space of a banyan tree. This point went against the banks core values. The new logo was designed by Shekhar Kamat, the creative head at the National Institute of Design(NID), Ahmedabad, Gujarat. It was during the inauguration of the SBI Central Office Building at Backbay Reclamation, Bombay on 1st October 1971, the iconic logo was unveiled.

The quest is, what was this new motif of SBI all about?

Extravagant inspiration for the logo creation 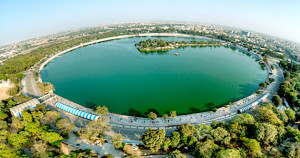 If you contemplate over the SBI logo, and compare it with the pictures above, you will be amused that the logo resembles the  shape of the Kankaria Lake in Ahmedabad, Gujarat.  In fact, SBI logo came from the National Institute of Design, Ahmedabad. And, apparently the artistic inspiration probably would have been the fascinating beauty of Kankaria Lake in Ahmedabad. However, the brand SBI has very close relations to Gujarat since many decades.

And, the iconic SBI logo has remained unchanged since 1971.

With a noble management strategy, an eye on innovation, fine financial strengths and strong market presence, the State Bank of India stands as a paradigm brand in the banking stratum across the world.